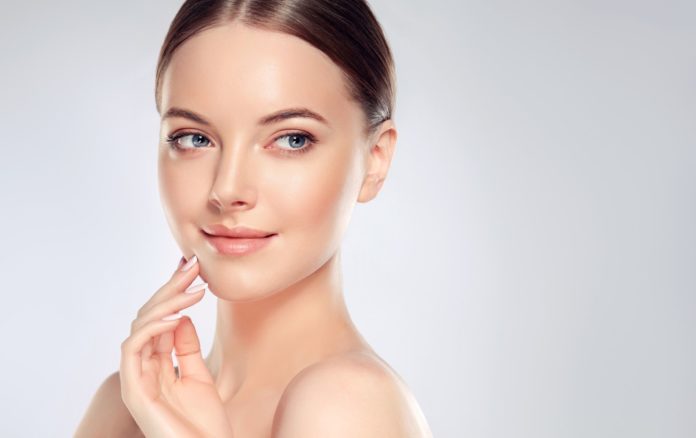 Developed by Contipro, HyWhite is a derivative of a low molecular weight (LMW) HA (10-20 kDa) and α-linolenic acid (α-LA) called sodium linolenoyl hyaluronate. Hyaluronic acid (HA) is widely known for its excellent biological properties, biocompatibility and biodegradability. Its effects in the skin highly depend on the molecular weight: high molecular weight HA stays mostly on the surface of the skin with a film-forming and hydrating effect; low molecular weight (LMW) HA penetrates deeper into the skin reaching the living skin cells and inducing a biological response. In HyWhite, LMW HA serves as a penetration enhancer. Moreover, the moisturizing effects of HA in the skin support a proper function of enzymes associated with corneocyte desquamation. Therefore, HA also contributes to the skin lightening effect.
α-LA is an essential, ω-3 polyunsaturated fatty acid. It can be found in various plant seeds, nuts and vegetable oils. It is known for its multiple beneficial effects, including inhibition of the process of melanogenesis in vitro; however, its poor penetration in the skin and fast degradation reduce its bioavailability in the skin and thus the effectiveness in vivo.
Indeed, α-LA is not commonly used as a lightening active ingredient in the cosmetic industry; it is used only as a common emollient despite its much greater biological potential. By connecting a hydrophobic fatty acid α-LA to a hydrophilic low molecular weight (LMW) HA CONTIPRO created amphiphilic molecules that can self-assemble to form micelle-like structures with a hydrophilic sheet and a hydrophobic core that can penetrate deep into the skin and inside the skin cells. In this way, CONTIPRO was able to achieve much stronger lightening effects both in vitro and in vivo. In vitro tests showed the inhibition of the melanin production by melanocytes, inhibition of tyrosinase activity and its enhanced degradation by the proteasome. The whitening properties of HyWhite were also confirmed by two independent clinical in vivo studies, where the product showed to increase the lightness of the skin and reduced pigmented spots, both in Asian and Caucasian skin types.

Mechanism of action
According to in vitro and in vivo tests, HyWhite inhibits melanin production in melanocytes; it inhibits tyrosinase activity and enhances its degradation by the proteasome. HyWhite increases skin lightness, reduces pigmented spots and improves skin colour homogeneity in vivo; the effect can be observed in Caucasian as well as Asian type of skin. Significant in vivo effects of HyWhite can be observed in very low concentrations (0.005 %).

Methodology of the test
Standard B16-F10 mouse melanoma cells were seeded in 6-well plates in a medium containing 100 nM α-MSH (melanocyte stimulating hormone) and treated with HyWhite for 48 h. Firstly, cell viability was measured by adding a non-toxic, fluorogenic dye resazurine. After incubation for at least 1 h at 37°C, the fluorescence was measured at ex/em 570/600 nm. Then the cells were collected, centrifuged and lysed with 1M NaOH containing 10% DMSO at 80°C for 30 min. After centrifugation, the absorbance of the supernatants was measured at 405 nm. Melanin content was normalized to the cell viability. According to the results, the derivate of HA with a-lineloic acid showed to be the most active, and much more active compared to koji acid, also in very low concentrations (0.0005%) (fig.1).

Test 2: Inhibition of tyrosinase activity – quantification
Tyrosinase is a copper-containing enzyme found in plant and animal tissues. It catalyzes production of melanin and other pigments from tyrosine by oxidation. It is a membrane-bound protein in melanosomes which are synthesized in the melanocytes.

Methodology of the test
Standard B16-F10 mouse melanocytes were seeded in 6-well plates, stimulated with 100 nM α-MSH (melanocyte stimulating hormone) and treated with HyWhite, α-linolenic acid alone or standard tyrosinase inhibitor kojic acid for 72 h. Cells were then collected, lysed and proteins in the lysates were determined using BCA protein assay kit. Tyrosinase activity was analyzed spectrophotometrically using a chromogenic tyrosinase substrate L-DOPA. Absorbance of an oxidized dopachrome was measured at 475 nm. According to the results, HyWhite is 5 times more active than koji acid, and more active than a-linolenic acid itself, probably by increasing cell penetration (fig.2).

Methodology of the test
B16-F10 mouse melanocytes were stimulated with 100 nM MSH and then treated with HyWhite and α-linolenic acid of the corresponding concentration for 48 h. Tyrosinase activity was detected in the cells using L-DOPA staining. Representative images from at least 3 independent experiments are shown (fig.3).

Test 4: Measurement of proteasome activity
The proteasome is a barrel-shaped proteolytic complex responsible for the degradation of unneeded, misfolded or damaged proteins. In melanogenesis, proteasome is responsible for the degradation of a key enzyme tyrosinase. Because α-linolenic acid has been shown to activate proteasome, HyWhite was for this type of activity as well. B16-F10 mouse melanocytes were treated with HyWhite for 72 h, harvested and lysed. The proteins in the lysates were quantified with a BCA protein assay kit and the samples were diluted with the lysis buffer to reach the equal concentration. The reaction mixture consisted of 10-15 μg of the protein lysate and 50 μM fluorogenic substrates suc-LLVY-AMC for the chymotrypsin-like, boc-LRR-AMC for the trypsin-like and z-LLE-AMC for the caspase-like activities. Fluorescence was measured at Ex/Em = 353/442 nm using an Infinite M200 fluorimeter (fig.4).

Test 5: Western blotting
The method is used to detect specific proteins in cell lysates. Firstly, the proteins are separated using SDS polyacrylamide gel electrophoresis and then transferred onto a PVDF membrane where they are labelled with specific antibodies. Protein-antibody complexes are then visualized by enhanced luminol-based chemiluminiscence (fig.5). B16-F10 mouse melanocytes were stimulated with 100 nM MSH and then treated with 0,01 % HyWhite, 0.05% kojic acid as a negative control or 0.001 % α-linolenic acid (LA). The concentration of LA corresponds to the degree of substitution of HyWhite (the amount of bound LA is 10%). 20 μM MG-132 was used as a well-established proteasome inhibitor. The cells were treated for 48 h and the intracellular level of tyrosinase was determined by western blotting technique. Representative western blots are shown together with quantification of the tyrosinase band intensities determined by ImageJ and normalized to β-actin level. The data represent mean±SEM from at least 3 independent experiments. HyWhite increases tyrosinase degradation by the proteasome. When the proteasome is blocked by MG-132, the degradation of tyrosinase induced by HyWhite does not occur.

Effect of in vivo application
The biological activity of HyWhite was evaluated by two double-blind, placebo-controlled, split-face in vivo studies on healthy female volunteers. Volunteers applied a cream containing 0,005% HyWhite on one half of the face and placebo containing α-LA of the corresponding concentration on the other half; the amount of bound α-linolenic acid in the molecule of HyWhite being 10% (it is called degree of substitution – DS), the concentration of α-LA for the comparisons was 0.0005%.

Conclusion
Hywhite is effective in very low concentrations (0.005 %). It is supplied as a powder and manufactured using NON-GMO ingredients. It is a completely safe raw material as proven in safety tests. It does not contain any preservatives. It is suitable for a wide spectrum of applications (whitening, brightening, lightening products; pigmented spots removers, anti-blemish products; antiaging products) and formulations, such as day creams (0.005%), night creams (0.005%), eye creams (0.005%) and serums (0.01%).